Famous for the longevity of its wines, Penfolds celebrates 25 years of re-corking clinics 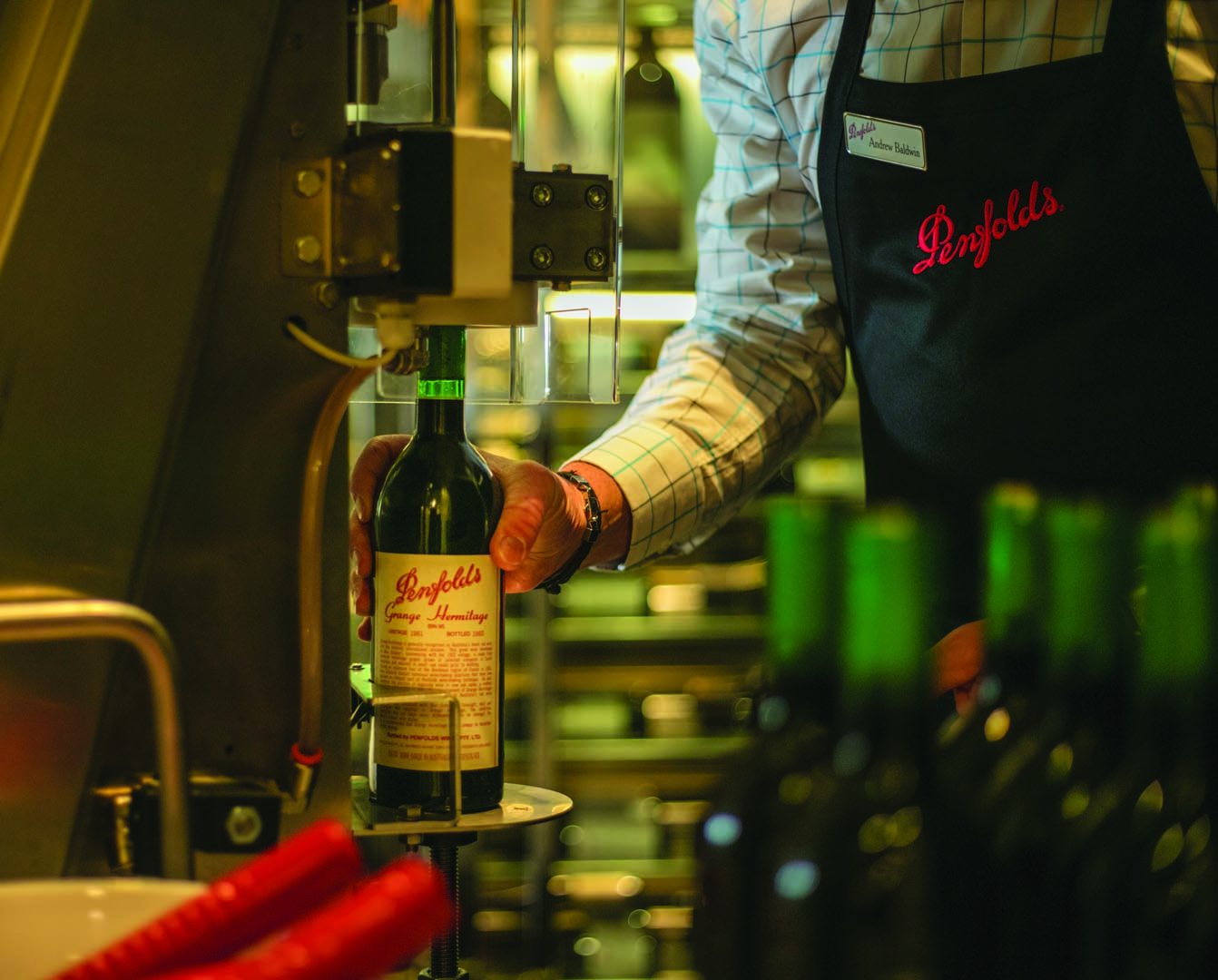 For the past 25 years, Australia’s Penfolds winery has offered its customers a chance to have their old vintages checked by its winemakers. Since 1991, the Red Wine Re-corking Clinic has been staged in select cities where any Penfolds red wines 15 years and older can be evaluated in a face-to-face meeting.

The most recent re-corking clinics were held in New York, Miami, Los Angeles and Vancouver in October. More than 130,000 bottles across four continents have been inspected to date.

Penfolds Chief Winemaker Peter Gago says the service benefits collectors and the winery. Customers get to find out what condition their older wines are in and gain insight into when to drink them. The winemakers get to see aged wines — in some cases, experimental or one-off bottlings they didn’t even know existed — and see how the wines are evolving. It also means that counterfeit or spoiled bottles are taken out of circulation.

Gago, who is the fourth chief winemaker at Penfolds since 1948, says he loves to ask customers why they haven’t drunk the wine yet. The question typically results in one of two common refrains.

“I’ve often heard, even from billionaires, ‘I can afford to buy it, but I cannot afford to drink it,’” Gago said during the Oct. 21 re-corking clinic in New York. A single bottle of an early vintage of Penfolds Grange, which was first made by winemaker Max Schubert in 1951, can fetch more than $100,000 at auction.

The clinic was one of the main events scheduled at the third annual Penfolds House, which sees the winery transform a property in New York to showcase its portfolio and history. This year, they took over Academy Mansion, a four-storey home on East 63rd Street, near Fifth Avenue, that was built by William Ziegler Jr. in 1921.

The two-day takeover also included educational seminars, dinners and an unveiling of the Penfolds Aevum Imperial Service Ritual, a special six-litre bottle of the 2012 Grange housed in a decanter produced by Europe’s oldest glass maker, Saint-Louis of France. A limited edition of five Imperials of 2012 Grange with the accompanying hand-blown, hand-cut crystal decanters is being released globally at a price of $185,000 US. A conventional 750 mL bottle of 2012 Grange retails for $860 here in Canada.

Customers book appointments for the re-corking clinics at penfolds.com, letting the winery know which wines and vintages they are bringing. The wines must be at least 15 years old, however; Penfolds encourages collectors to wait even longer before taking advantage of the service.

Guests have turned up with one bottle and as many as 180, as was the case earlier this year at a clinic in Adelaide, where the Penfolds winery was founded in Australia. One winemaker spent an entire day sorting through the selection.

If the clinic is in Australia, there might be six or eight winemakers working different tables. It’s not uncommon in Sydney or Melbourne to have nearly 1,000 bottles a day coming in for evaluation. The 2016 re-corking clinic in Melbourne ran over three days.

At the start of the process, Penfolds winemakers seek information about the provenance of the bottles in front of them. They look to find out how and when the customer acquired the wine and how it was stored.

Over the past 25 years, there has been a noted improvement in how wines are being cellared.

Penfolds winemakers say clinics in Singapore are noteworthy for the impeccable condition of the samples evaluated. Collectors there lavish their wine cellars with great care and attention. Sessions in Australia, particularly hot climate regions like Brisbane or Perth, are more varied — although an increased use of wine fridges has helped to maintain the longevity of the wine.

“Just because it comes in doesn’t mean it always has to be opened,” says Senior Red Winemaker Steve Lienert. “A lot of times, the person would really like to open the bottle to see what it’s like and gauge how their cellaring is.”

Winemakers will look at the condition of each bottle, especially concerning themselves with the fill level. They will only open a bottle if the level is too low or shows signs the cork has leaked.

“Once it gets into the shoulder that’s when it gets critical. The wines can deteriorate pretty quickly,” explains Lienert. “Lower than that, regardless of what the wine looks like, it wouldn’t be certified. You’d be adding too much of another wine and changing the integrity of the bottle.”

Once open, the wine is blanketed by inert gas to limit exposure to oxygen. A small sample is poured and evaluated by the winemaker before being shared with the owner. If the wine is sound, the bottle is topped up with the current vintage of the same wine.

Clinical trials by the winery show the addition of two percent of a new wine doesn’t noticeably affect the aroma and flavour of the older wine. More than two percent can be detected, so bottles can only be re-corked once.

The wine then gets a new branded cork and has a sticker affixed to the bottle, certifying that it had been through the re-corking clinic and was assessed to be top quality. Each wine has a unique number that’s logged into a database kept by the winery. The clinic is run in association with Christie’s Auction Houses outside of Australia and Langton’s at home.

Winemakers will share their thoughts about drinking windows for the wines. As Lienert says, “They’ve been able to try their wine so they can decide when they want to drink it. Whether that will be next week or another five or 10 years, when they open it they’re guaranteed that the wine inside is sound.”

Wines that don’t pass muster receive a white dot. They might be oxidized from improper storage or musty due to a bad cork. Suspect bottles are re-corked with an unbranded cork and sent home.

Lienert, who has worked at Penfolds since 1978 and been involved in re-corking clinics from the beginning, says the opportunity to see older bottles is always a highlight.

“People might think, ‘Oh, you work for Penfolds, you’re seeing older bottles all of the time.’ We actually don’t. We don’t see Granges from the 1950s and 1960s that often,” he says.

There are also rare occasions when something unexpected turns up. At the re-corking clinic in Melbourne this year, a gentleman came in with a bottle of 1959 Magill Hermitage Cabernet.

“In the 1950s, Max Schubert did a lot of trials that were bottled that we come across from time to time, but this actually had a commercial label,” he says. “We’d never seen it before.”

There can be other surprises, too. Sometimes the liquid inside the bottle doesn’t match the label. Lienert explains sometimes it’s not even wine.

“On more than one occasion we’ve found bottles filled with cold tea,” he said. “Someone drank the bottle and filled the bottle with cold tea so it would look better on display.”

Penfolds Red Winemaker Andrew Baldwin says the winery has seen its share of counterfeits over the years, which is why they brand the re-corking clinic corks — one specifically for Grange and another for all other wines — and have specially designed the certification label that wine-makers adhere to the bottles.

“It’s scored with an X,” he explains. “If you try and peel it off to put onto another bottle, the label tears.”

This year’s re-corking clinic also gave customers a first look at the new Penfolds luxury releases, including the 2012 Grange, the 62nd consecutive release of what is considered one of Australia’s greatest wines. The multi-region (Barossa and McLaren Vale), multi-vineyard blend of Shiraz and Cabernet has been eagerly anticipated given the quality of the growing season and the success of Penfolds’ other 2012 vintage red wines.

“We’ve been waiting for this vintage of Grange for a while,” Gago explains. “Grange is not about bigness, it’s about balance. If you’re expecting oak, alcohol, extract or concentration, that’s not what Grange is. It’s not what Grange aspires to be. It’s a wine that you can drink the day of its release or 50 or 60 years later — that’s its claim to fame.”

Grange is made to a stylistic template, in a “house style” to use the term employed by Champagne producers, but no two vintages are ever the same. The vintage conditions differ throughout the growing season. The percentages of Shiraz and Cabernet Sauvignon vary from year to year. (Sometimes no Cabernet is added, as was the case with the 2000 vintage, the fifth time it was produced with 100 percent Shiraz.) The sourcing of fruit changes from vintage to vintage.

Some 7,000 to 9,000 cases of 12 bottles are made in an average vintage. “It’s not a rarity thing,” Gago says. “Every year we make as much as we can. We’re planting new vineyards, we’re looking at new growers all of the time… We could sell 10 times the volume, but we cannot make 10 times the volume at that quality level. The wine comes first.”

The 2012 vintage is justifiably celebrated as one of the great Granges — “akin to the 1963 Grange but with a modern sheen,” according to Gago and others — but insiders also point to the polish and complexity of the 2013 waiting in the wings. It’s looking like collectors can expect a repeat of the 1990 and 1991 Grange scenario, with back-to-back stellar vintages on offer.

Gago mentioned there’s a tradition in some parts of Australia where a bottle of Grange is purchased with the birth of a child with the idea of serving that wine to celebrate their 21st birthday.

Written by Christopher Waters on Tuesday, 13 December 2016. Posted in The Producers