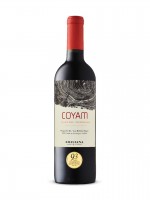 From one of Chile’s pioneering biodynamic producers, Coyam has long been a favourite. The Emiliana winery counts itself as the single largest produce of organic wines in the world. The 2013 Coyam reflects the cooler growing conditions yet delivers a rich and flavourful red that’s pretty serious wine for the price. A blend of 48 percent Syrah, 24 percent Carménère, 11 percent Merlot, 10 percent Cabernet Sauvignon, three percent Mourvèdre, three percent Malbec and one percent Petit Verdot yields a red wine with a juicy core of fruit, gentle tannins and long finish. Drinking nicely now, this is suitable for aging for the next two to four years.